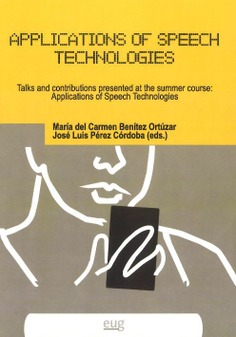 Talks and contributions presented at the summer course

This book contains the contributions to the course "Speech technologies: applications", held in Almuñecar, Granada, from June 27th to July 1st 2011. The course developed from a proposal from "The Thematic Network in Speech Technologies" (RTTH), was financed both by the network itself and the "Granada Excellence Network of Innovation Laboratories" (GENIL) of the University of Granada. The goal of the course was to present a general overview of real applications of speech technologies. The topics of the course, developed by specialists from research centers, universities, and leading industries on speech technologies, were chosen with that goal in mind. Those topics include applications such as speaker adaptation, the L2F Broadcast News Speech Recognition System, Text-to-voice recognition and conversion at Google, biometric applications of speech processing and text to voice conversion applications.