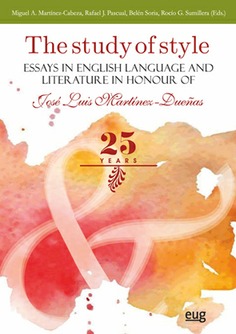 The study of style

This collection of essays is published as a tribute to Professor José Luis Martínez-Dueñas. The chapters of this volume reflect and illustrate key concerns of the stylistic theory and practice. Leonard Neidorf and Rafael J. Pacual explore certain stylistic trends in Old English literature, Rocío G. Sumillera approaches style from the perspective of Translation Studies. Julián Jiménez Heffernan and María Elena Rodríguez Martín focus on style in the eighteenth century in literature and in film adaptation. Michael Toolans study of a choral work cuts across periods and approaches in his combination of multimodality, iconicity and word painting. The analysis of style in works of fiction produced in the twentieth century is the goal of the chapters by Mercedes Díaz Dueñas and Rocío Montoro. The volume closes with Esther Romero and Belén Sorias discussion of the challenges to Relevance Theory posed by fictional discourse, and Eugenia Esperanza Núñez Nogueroles review of the concept of pragmatic borrowing of anglicisms in Spanish. The works analysed range from Beowulf to Paula Hawkinss The girl on the train and Alice Munros Corrie, and include Samuel Richardsons Clarissa, Jane Austens Love and friendship, and Gerald Finzis Lo, the full, final sacrifice.