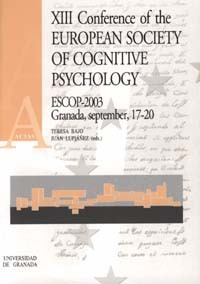 XIII Conference of the European Society of Cognitive Psychology

Beyond the Spanish scientific development, the progressive interest for a common scientific and education space in Europe is also notable if we attend to the increasing number of submissions and registrations along the last ESCOP meetings, reaching around 900 people registered in the Granada meeting. This is a clear landmark of a remarkable growth of interest in a common European project for Cognitive Psychology