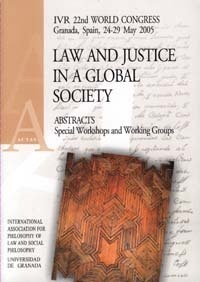 Law and justice in a global society: abstracts special workshops and working groups

The right to strike is intimately related to the idea of contract. It is not an ordinary social' or 'economic' right, rights which guarantee the workers' standard of living. Rather, the right to strike would have been justified even if it could be shown that in general, strikes do not promote, or even harm, workers' interests. Our paper claims that the right to strike emanates from a conception of social cooperation that is based on the idea of contract: contract not only in the sense of the conditions agreed upon by employers and employees, but in the sense of a social contract from which the basic structure of society derives its legitimacy. The mass strike is one of the principal occasions in which the social contract is challenged and renewed. By virtue of protecting the right to strike, a collective enterprise can appear as a fair and voluntary cooperation of individual wills, rather than as the execution of a single collective will. The moment of a strike dissolves social hierarchies and statuses, and brings back the contracting parties to a state of natural equality in which the social order can be reconfirmed. It creates a socio-historical setting in which the philosophical construct of the original position' or 'state of nature envisaged in the social contract tradition can be realized.